Call Us 24 Hours/7 Days For A Free Consultation

As Reliance On Ridesharing Services Increases, So Do The Associated Risks

For the past several years, ridesharing services have become increasingly popular on a global scale. As a destination for millions of tourists each year, South Florida is a hot spot for ridesharing services such as Lyft and Uber, which offer easy, affordable and last-minute rides at the tap of a screen. However, the increasing presence of ridesharing vehicles on the streets of South Florida has led to an increasing number of accidents involving their drivers. This is particularly problematic due to the fact that the people who are involved in these accidents—whether as an Uber or Lyft passenger/driver or as the passenger/driver of another vehicle—often have difficulty proving liability.Therefore, in such a case, having an experienced uber accident lawyer in Florida by your side will increase the likelihood of receiving compensation for injuries sustained in a ridesharing accident.

I’ve Been Involved In A Ridesharing Accident: Now What?

There are several steps you should take if you are involved in an accident with Uber or Lyft. First, you should call the police so that a formal report can be written while the details of the accident are still fresh in your mind. Simply provide the police with a factual account of the event rather than automatically assigning blame to the Uber or Lyft driver. Second, document the accident by taking photos detailing the environment, vehicles, and any injuries that resulted from the accident. The information you document at the scene will be very helpful in proving liability. Last but certainly not least, do not sign any documents or make any statements to company representatives until you have an attorney by your side. The Uber or Lyft driver will likely contact their company at the scene of the accident right away and an attorney will be able to determine whether or not filing a claim is warranted, and if so, guide you through each step of the process.

When An Uber Or Lyft Accident Occurs, Who Is Held Responsible?

The circumstances of the Uber or Lyft accident will dictate who is ultimately held responsible; it could be the driver of the ridesharing vehicle (in which case the company would be held responsible), or the driver of another vehicle that was involved in the accident (in which case a claim could be made against that driver’s auto insurer). Regardless of who is at fault for an accident, a passenger of an Uber or Lyft vehicle should never be held responsible, and should therefore be able to collect compensation for any injuries they suffered as a result of the accident.For that seeking legal services of a seasoned uber car accident attorney is of immense importance.

In order to determine exactly which situation might apply in your case, it is important that you contact an attorney who can assist you in identifying the appropriate sources of coverage and in getting you the compensation to which you’re entitled.

Due to its status as a no-fault state, Florida requires every driver to have PIP included in their insurance policy. PIP will cover 80% of your initial medical bills up to a total of $10,000, regardless of who was at fault for the accident. This extends to being a passenger in a car involved in the accident. However, it is important to note that in order for an injured party to receive PIP benefits, there must be a record of them having sought medical treatment within 14 days from the date of the accident.

Whether you’ve been involved in an accident involving an Uber or Lyft, having an attorney who is knowledgeable about the claims process is essential. Not only will an attorney increase the likelihood of you receiving proper compensation for medical expenses, lost wages, and pain and suffering, but they will also be able to guide you through each step of what can turn into a complicated process. They will assist you in obtaining the necessary documents (police reports, medical records, phone records, etc.), determine possible factors that led to the accident, conduct a thorough review of all of the evidence, and ultimately build a compelling case in your favor.

Call Us 24 Hours/7 Days For A Free Consultation

Since 2009, ridesharing services have become increasingly popular. While they offer local drivers an easy way to make some quick cash by utilizing their own cars as taxis, they also allow for people to catch last-minute and affordable rides to wherever they need to be. Uber and Lyft continue to dominate the space, as they offer services in 300 U.S. cities and 570 cities globally.

While ridesharing services may seem like a win-win situation for drivers and riders, the increasing demand for and presence of Uber and Lyft vehicles on the road has not been without criticism and concern. For example, several Florida cities have pushed back against these companies, in part because they would largely replace the preexisting taxi companies. In addition, some people question the safety of rideshare because it requires riding with a random driver in the driver’s personal vehicle, whereas Taxi drivers are licensed by the State.

Although neither company provides statistics with regard to the number of accidents in which its drivers have been involved, stories of ridesharing car accidents can be found all over the internet.

In response to the increasing prevalence of Uber and Lyft services in Florida, the insurance industry had to reformulate how to provide these companies with insurance policies. The policies are known to require strict criteria that are seemingly impossible to meet. As a result, drivers and riders have had significant difficulty in actually obtaining compensation after an accident.

In addition, the status of Lyft and Uber drivers as independent contractors as opposed to employees limits the rideshare providers’ liability. Lawsuits filed in an attempt to change the companies’ policy in this regard have largely failed, allowing Uber and Lyft to continue operating in the absence of many risks and at the detriment of their drivers.

The obvious risk involved with driving for or riding with Uber and Lyft highlights the importance of having a ridesharing accident attorney on your side. In order to improve the likelihood of receiving compensation for injuries sustained in a ridesharing accident, it is vitally important that you speak with an attorney to get experienced legal representation.

Fenstersheib Law Group, P.A. has its main office located in Hallandale Beach, Florida. We are also pleased to provide legal representation throughout the entire state of Florida including these Florida cities: 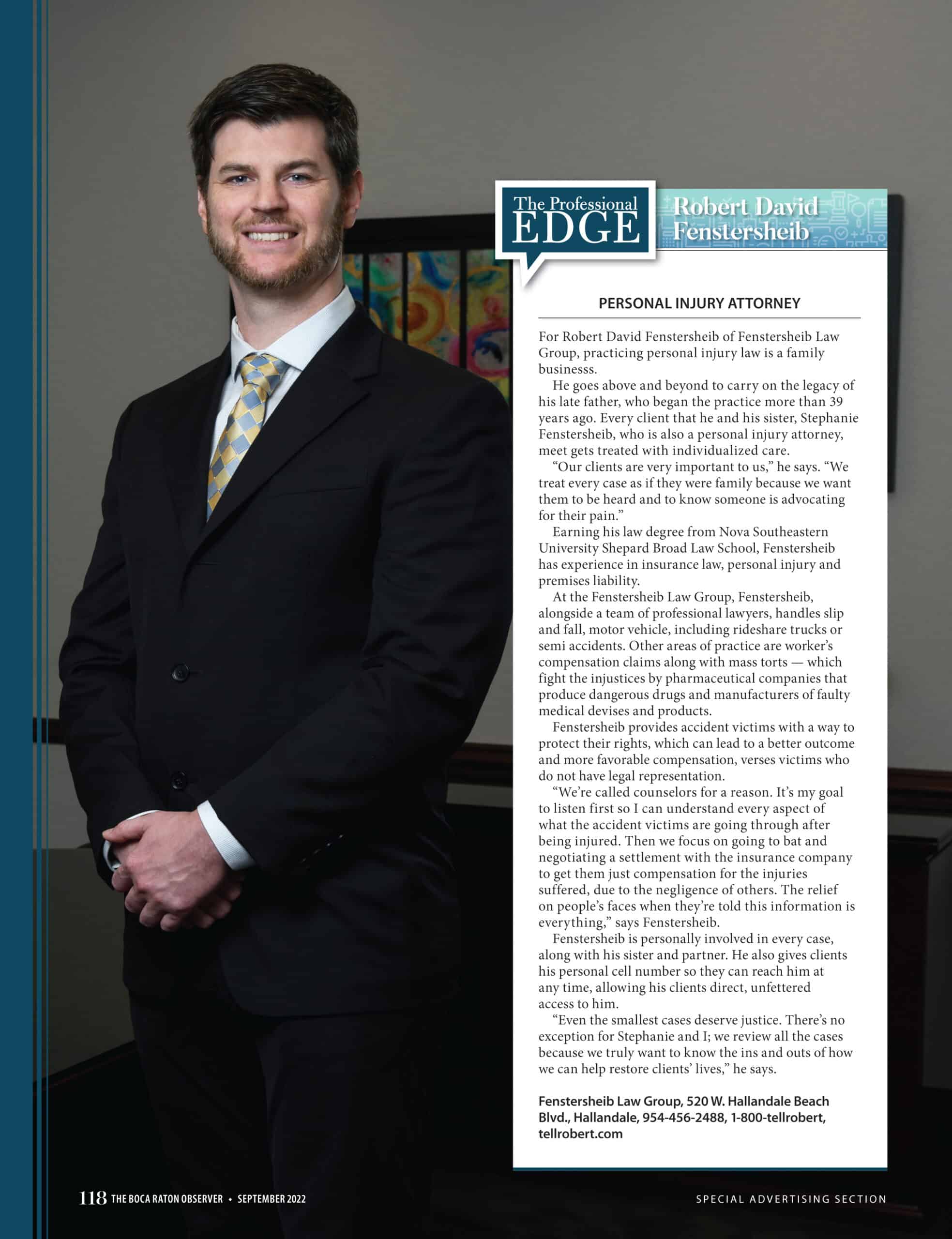 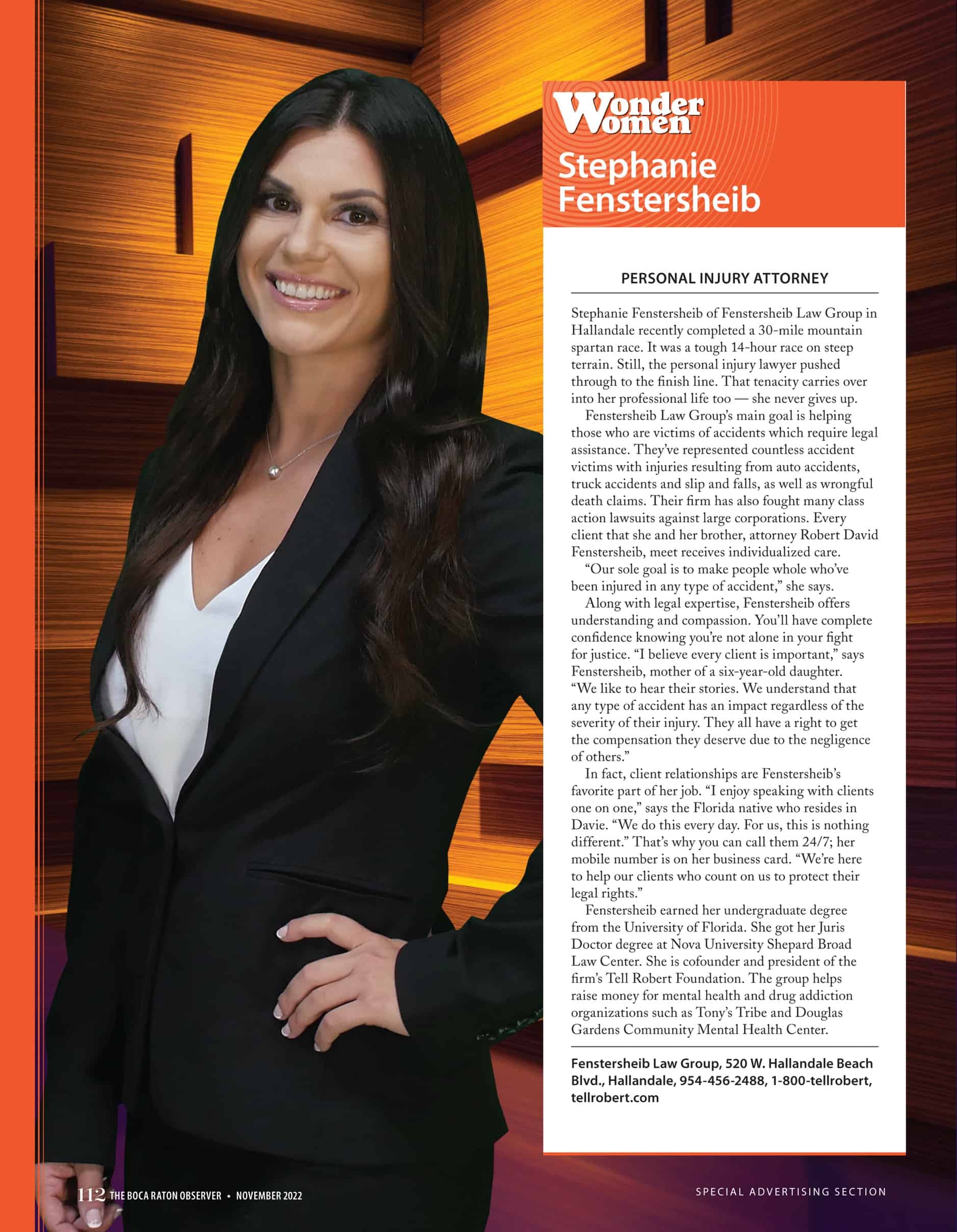